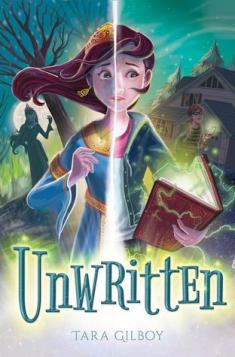 Favourite Quote: “What if every story ever written is a world in another dimension, waiting for us to find it?”

Gracie has been having dreams of fire for as long as she can remember. It’s always the same, the heat of the fire around her, anger and a woman with a crown beckoning to Gracie through the flames. Story glimmers, her mum told her when the dreams became more frequent and fearful.
It turns out, Gracie was born in a story book called Bondoff before her mother escaped with her into the real world through a magical parchment to escape the evil Queen Cassandra. Because who wouldn’t want to believe that? Unfortunately this wasn’t enough for Gracie, she needed to know how her story played out and what happened there for her mum to want to escape. She decided to find out the truth for herself, coincidentally, the writer, Gertrude Winters, was in town doing a book signing. She snuck out to meet her to finally get the answers she’s been searching for, only to instead accidentally send Gertrude Winters into the world of Bondoff.
Through the writer, Queen Cassandra is able to track down the missing characters from the story to make sure everything goes back to the way it should have been for her own personal happy ending. Gracie has always wanted to find out the truth about who she was in the story, but where she’s ended up wasn’t what she imagined at all. Everything is all wrong. Gracie seems to be the only one in Bondoff that remembers the real world and fights to get her life back before the Gracie in the story world takes over for good.

‘”Have you ever heard of a villain with the power to read her own story, to know what happens in the end? The ability to move into and out of the story world? The Vademecum makes Cassandra different from every other villain ever written. It gives her insight, instruction, and a way to bring about her own happily ever after. How I would have loved to have that for myself. A way to move into and out of my own story. A way to know how my life would turn out.”‘

I really enjoyed the concept of the story, it’s unique and full of great ideas. A story within a story. Tara was able to bring both scenes to life, both in the real world and in Bondoff from the characters behaviour, the detail in the environment to the outfits they wear. It’s a clear distinction which really allows the reader to get lost in the scene.
I really liked how our ‘writer’ Gertrude Winters, uses a different representation of herself to make her characters in the story. She believes the best characters are the villains which is who she relates mostly too. A certainty that the villain could get her own happy ending.

‘”I wrote the story during an awful time in my life.” Gertrude Winters seemed to grow stronger as she talked. “Everyone I loved acted as if they despised me. I was tired of stories that only celebrated heroic characters. I’d done bad things, but who hasn’t? We’re not all good or bad. It’s why I wanted to write a story that honoured the villain.”
“At the bookstore, you said villains were fascinating,” Gracie said. “Your favourite characters.”
“Because what does it mean, really, to be labeled a villain? No one actually thinks of herself as a villain. We are all the heroes in our own stories.”‘

I liked Gracie as a character, she’s young and naive, with all the secrets kept from her, she finds the courage to find out the truth. When she’s put in difficult situations, her responses are realistic and relatable. She gets upset, she gets frustrated but she pushes on because she has no other choice. All she wants is to get her life back with her mum whilst fighting against the possibility that she could turn into the character in the story that everyone is afraid of. She’s frustrating at times because she’s constantly ignoring her parents advice but she’s young and confused after all so you can’t blame her too much on her actions.
Walter was an interesting character, it’s a good concept to include a character that doesn’t even believe in their own story. He believes that fiction is a waste of time and that science defines everything. He also immediately forgets who he was in the story unlike Gracie with I personally found odd. As a character, he was difficult for me to relate too, the nerdy kid with no friends who has a role to play whether Gracie likes it or not as he was originally from Bondoff like her, so it was intriguing that he ended up playing a huge part in the end since he was just the ‘sidekick’.

‘What good is a hero who fails to see a story’s magic?’

Overall I thought the book was good, but I felt it was missing a bit more detail. It’s target audience is definitely for the younger generation who are looking for a romanticised fantasy book but may lack character development and in-depth scenery. What was Cassandra’s happy ending to fight for it so badly? Where did she end up? Why does wanting a happy ending make her the villain? I felt the author could have also included more additional characters rather sticking to just the main ones. Bondoff felt incredibly small and lonely with it’s limited population.

I would recommend this to younger adults looking for bookish fantasy.

Goodreads Review:
Twelve-year-old Gracie Freeman is living a normal life, but she is haunted by the fact that she is actually a character from a story, an unpublished fairy tale she’s never read. When she was a baby, her parents learned that she was supposed to die in the story, and with the help of a magic book, took her out of the story, and into the outside world, where she could be safe.
But Gracie longs to know what the story says about her. Despite her mother’s warnings, Gracie seeks out the story’s author, setting in motion a chain of events that draws herself, her mother, and other former storybook characters back into the forgotten tale. Inside the story, Gracie struggles to navigate the blurred boundary between who she really is and the surprising things the author wrote about her. As the story moves toward its deadly climax, Gracie realizes she’ll have to face a dark truth and figure out her own fairy tale ending.