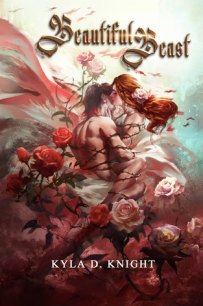 Favourite Quote: “The creature drew back, and moonlight washed over his face as he stared down at her. Those strange, dark eyes softened. Filled with sadness. And it was in that moment that Layna, through the contact of their skin, through the connection of their eyes, sensed his sickness and suffering. There was no logic to any of it, no thought for the reality of her situation or the danger she was in. She felt only a great, yawning sadness.”

Layna is on a mission to stop the Snow King, Ryever, from evil trades and corrupt dealings in Darn after spending a lifetime living around his lies and consequences.
When a new handsome dark stranger meets with Ryever, Layna is determined to find out why. What she doesn’t realise is that the stranger, Axis, has noticed her first. When Axis unintentionally puts her life in danger, he saves her and frustratingly realises that he can’t stay away until he knows she is safe which already seems like a full time job.
Layna is surprised when her dark anti-hero saves her a second time from Ryever and his men. She is even more surprised when he offers her a safe place with him with the promise of comforts and hot water. With nothing left to lose, Layna follows Axis to his home to find haunting secrets and a deeply disturbing past surrounding those around her, as well as intense passion and a feeling of belonging somewhere for the first time.

‘It was the way he took care of people. Thought about them. Put them first. It was his mix of light humor and deep thought. The blend of culture and wildness. And the dark, hidden core of him that was still a mystery to her.’

I wasn’t sure what to expect from this story, the passion became present almost instantly within the first chapter which seemed almost unnecessary at times. Not that I don’t like my share of erotica, but the characters had only seen each other from a distance before they found the need to touch themselves. I was already hooked on what sort of character Axis was going to be by his dark inner demon fighting to remain normal and passive in company and I was craving to know more over anything else.

‘All the same, the girl had been skilled. Very careful. Only someone like Axis would have known she was there. But Axis had known, and it had irritated him.
Partly because it had made him think about Ryever all day yesterday and today. More because he’d been tapping into his heightened senses to keep track of her – that was always a strain.
A dangerous temptation.
A crack in the iron cage of his will.’

The characters were definitely unique and well described with some great character building, especially on Axis’s part. You begin to understand why he is so determined to put everyone before himself after what happened with his mother, the guilt and anger he feels on a daily basis is so emotionally consuming, you don’t know how he has the energy to get dressed let alone anything else. His past is so dark and haunting, it’s easy to see why he snaps quickly and why he fights with his inner demons. He doesn’t know whether being around Layna helps ease his suffering or simply makes it worse. He’s now got something worth fighting for, however what he’s fighting against is putting her in serious danger.

It would have been great to have spent more time on Tristan and Gareth. They had such an important role in the story but you felt you didn’t really know who they were or much of their past, it was more of passing details to fill in some blanks with Axis’s story rather than their own individual characters. I would have loved to have explored the world of the queen and her children before the curse, for Layna to remember growing up surrounded by magic and her family with a few flashbacks. The history of the children in the forest was so fascinating, I wanted to know more!

‘An arm hooked with hers at the elbow. Another hooked onto her other side, and she was wrenched sideways, stumbling.
She was in a ring of dancers, swinging in a circle on the wooden, moonlit crest. The light was cold and eerie as it splashed over the faces and forms of the dancers.
They were not human.
Their bodies were a mix of animal and plant, a few human-like features appearing here and there. One had a sharp-featured human face but arms like branches, and these twined with the huge, bird-like wings of the dancer next to it.
There were legs of deer, ears of foxes, bodies of bramble and vine. Some wore shirts of moss; others were clothed in ragged scraps of cloth. A few were naked, male genitals swinging, female breasts swaying.
Their laughter was the music to which the dance was set, and it was high and cruel and mad.’

Personally, I felt that the author spent too much time with passionate scenes between Axis and Layna than over the actual story surrounding them. Some readers may have preferred this take as a Beauty and the Beast erotica, however I found this to be quite disappointing as I was really enjoying the telling of the backstory surrounding Axis’s past with his father and the children in the forest. Instead of introducing new details, I found that there was quite a lot of repetition instead, I felt like I was reading the same lines over and over again at times when talking about Axis and his difficult past rather than delving more into various past scenes and characters. I guess the main reason for this slightly negative review is that I enjoyed the story far more than I expected but felt it was unfinished in so many ways. So many questions left unanswered.

Overall it was a great story and I would really hope that the author will bring out a second book to dwell deeper into the curse and the children, as well as more of the steamy romance too 😉

Goodreads Review:
Dark, sexy…beautiful.
Axis shouldn’t leave his castle. He’s a wolf shifter, and his wolf form…has some problems. But he hates the confinement. Hell, he hates everything about his life.
Until he grabs an excuse to get away from his comfortable prison and meets Layna.
She’s bold. She’s beautiful. And she’s in trouble.
But Axis can’t stay away from his castle for long, so what else is there to do but bring her to his home to keep her safe? Well, safer. Sort of…
The second Layna sets foot in Axis’s remote, eerie castle, she knows she’s stepped into a place of secrets—and they aren’t pretty ones. Axis may be the sexiest man she’s ever seen, but what is he hiding? Why is he so difficult and moody?
And what the hell is making that sound?