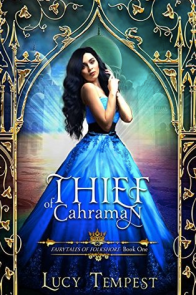 Favourite Quote: “For endless moments, I felt as if the marketplace disappeared around us as our eyes locked. There was nothing left in the world but his eyes and my thundering heartbeat.”

‘You have been summoned to Sunstone Palace to compete as one of fifty eligible young women of status, in our search for the future Queen of Cahraman’

Since her mother died 5 years ago, Adelaide, also known as ‘Ada’, has been moving from town to town thieving in order to survive, mainly for necessity, but she can’t deny that she has adapted a skill for it over the years and may sometimes use it to her advantage – or vengeance. When she heard rumour that her mother lived in North Ericura, Ada felt suddenly drawn to the border of Man’s Reach to the town of Aubenaire, thinking it will be a nice place to settle down and be closer to her mother once again. With a good steady job, clean accommodation, plenty of food and a warm-hearted friend Bonnie who would do anything to make Ada feel at home, she finally felt happy.
One evening a stranger appeared, Lady Nariman Rostam, begging Ada to help her with her broken carriage at the edge of Hornswood forest. Confused by the story since there was only rumours of uncharted lands at the other end of the woods, Ada’s curiosity outweighed her fear of the woods and she followed Lady Nariman back to her carriage, only to find nothing there. The world turned upside down when Ada found herself transported to another world of sand and spices, the Kingdom of Cahraman, with a threatening mission to steal an object from the Sunstone Palace, or Bonnie and her father will die. With no choice, she poses as Lady Ada to enter the palace to fulfil her task.

‘”What is this?” I asked, getting dizzy keeping up with her pacing.
“This place or this situation?”
“Either, both – just tell me what you want so I can go home,” I pleaded.
“Where is home, though?”
That question hit me like a punch to the throat, choking me, making it difficult to speak. She knelt beside me, looking much younger than she did earlier, her features softening by some emotion that I couldn’t fathom. “Allow me to welcome you to mine in this realm.”

One thing said for sure, I absolutely adored this book! I was given a copy to read via NetGalley because I fell in love with the cover and for all of my blatant obsessions with retellings of Beauty and the Beast, I’ve not yet read a retelling of Aladdin until now. I can’t say it will be the last either. This hit my favourites list instantly!

The characters were great, each had their own impacting personalities you come to love and hate, from Bonnie with her innocent disposition with her passionate desire to venture across fantasy lands with Ada, Cherine and Cora both different in temperament but unexpectedly become good friends whilst competing against each other both helping Ada become the Lady she claims to be, plus you’ve always got to have the competitive nasty arrogant character that will do what they can to win, Princess Fairuza.

‘She cupped my cheek affectionately. I again had a feeling Cora realised how afraid I was of being eliminated, and for a reason other than caring about the competition itself. She had no empty words or white lies to give me, but this quiet empathising gesture meant far more than any variation of “You can do it!” could have.’

I really liked Cyrus, our elusive disguised hero that takes pleasure in sneaking into the Palace vault with his demon accomplice, Ayman. Together they decided to help Ada in sneaking around the Palace to find her lost treasure, even when she couldn’t give them a full explanation as to what it was or why it was so important to her. Cyrus was charming, sneaky, witty and underneath it all, a perfect gentleman. Who wouldn’t be swooned by his pleasing personality and giving nature.

‘His nod was sympathetic. “I’ve found that I can’t stand the taste of anything orange. Apricots, carrots, and, well, oranges.”
“That’s nice,” I hissed. “But you really need to stop dodging my questions.”
The corner of his bright eyes crinkled and heart-melting dimples formed in his cheeks as he chuckled. “You’re focused, I like that.”
“Well?”
“Shouldn’t I have the honour of knowing who’s threatening to report me first?”
I mock curtsied. “Call me Ada.”
He bowed fully this time, tucking his free arm under his chest. “Call me Cyrus.”‘

Ada was everything you want as a fairytale protagonist; independent, determined, down to earth, courageous and well, herself. Not a false girl in a dress set on living happily ever after with her prince on a pedestal, but rather selfless and brave for those around her. She gives up everything to put others before herself, even if it means to steal from the crown in order to do it which is punishable by life in prison. She was so fixated on saving Bonnie, that she didn’t really take in everything going on around her. I really liked the fact that she didn’t get lost in the luxury or in the chance to win the Prince and start a new life for herself in the Palace. She was determined to take part in the act in the competition only to buy herself more time to look around for Nariman’s oil lamp.

The settings were fantastic with the beautifully stunning palace interior right down to the dusty market streets with it’s ancient shrines to the goddesses. It was easy to lose yourself in the story when the author was able to bring the scene to life so easily, even if it was getting lost in the palace dungeons.

‘We rounded the corner and sheets of water instantly dropped down on us, pouring down the windows as we went through a faintly glowing waterfall. Behind it was a cave, the ever-shifting reflections of the cascading water dancing on its walls. The train’s movement set off millions of blue dots and they came to life, lighting our way as we travelled deeper inside the mountain.’

I liked the whole fairytale aspect of this book, not only the Aladdin retell, but also how Cinderella was also subtly included in the mixture with her cruel stepmother and vicious stepsisters at the beginning. A friend of Ada’s that she wanted to help protect before being swept off to Cahraman. It had the perfect amount of our original Aladdin tale with a lovely little twist. I’m already itching to read Tempest’s latest sequel which I have already pre-ordered; Prince of Cahraman. I need to know what happens next!

Goodreads Review:
ONE MONTH. FIFTY CONTESTANTS. ONE PRINCE. AN IMPOSSIBLE HEIST.
You have been summoned to Sunstone Palace to compete in our search for the future Queen of Cahraman.
After years on the run, Adelaide thinks her lonely and dangerous life as a thief is finally over. But her world is upended when a witch steals her away to a faraway kingdom, to perform an impossible heist. If Adelaide fails, her newfound family would be sacrificed to a beast.
To complete her mission, she’s forced to assume the role of a noblewoman and enter a royal competition. The prize is the hand of the elusive Crown Prince. Elimination means certain death.
As the witch’s literal deadline approaches, Adelaide has one last gamble to save the day, and to escape to a new life with Cyrus, the handsome and mysterious fellow thief who stole her heart.
But everything falls apart when the prince finally reveals himself…