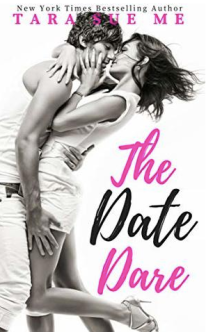 Favourite Quote: “There is no need for me to look for my soulmate. I know who she is.”

Darcy Patrick and Elliott Taber have been best friends since they were 6 years old, now 20+ years later their friendship is stronger than ever. That is, until Elliott realised that he started to feel something more. Ignoring his ever growing feelings, he found it easier to simply bring dates along to avoid ever being really alone together. Something Darcy noticed.

Darcy is determined to see her best friend happy, his track record with dating the wrong woman so shameful, Darcy doesn’t even know their names anymore, so she comes up with a plan. A dare. Something she knew Elliott couldn’t resist, dares being his personal kryptonite. A dare for her to set him up with a woman of her choice, ensuring a perfect match. Elliott stupidly agrees on the condition that he can do the same for her. He never imagined he could actually pull it off and find her the perfect guy.

”The more and more I went out, I realised I already had a great guy as my best friend and whoever I ended up with not only had to measure up to you, but to surpass you.”
I’m not sure how to respond. She’s not saying she wants me. She wants someone better than me. And now she has him because I gave him to her on a fucking silver platter’

A lovely easy read romance to curl up with for an evening.
The story is told from both points of view from the main characters, Darcy and Elliott, which brings a lot more depth into their cute love story. We know Elliott’s feelings for Darcy straight away, something I think he’s even still surprised over a year after first realising. His feelings are so strong that he can’t allow himself to be in the same room with her alone without the safety of another, just incase he slips up. Darcy has already filled us in at this point that Elliott is a real handsome heart-throb with a great body so I’m already dying for him to make a move. Obviously it isn’t as easy as that. Their friendship is worth everything. Any action that would risk what they have isn’t worth considering. So he hides his emotions from her, accepting his fate that he will never be with his soulmate.

‘My first thought is that surely she can’t be right, but her words echo in my head and I don’t need a calendar to know she’s correct. I haven’t put myself in a position to be alone with her since the charity ball last December.’

Darcy is a strong and independent who knows what she wants in life, even if she doesn’t always push for it. Elliott means the world to her, but she’s always seen him as her best friend. Her really hot best friend. Nothing to deny there. She spends so much time trying to make him happy thinking she can find him the perfect woman but is completely blind to his true feelings. For someone who knows so much about her best friend, she fails to see how he really feels and why he’s acting differently towards her.

‘We shouldn’t be here like this. Shouldn’t be sitting this close to each other on the couch we’ve both sat on probably a million times. Because nothing about those times is anyway similar to what we’re doing right now.’

I really enjoyed the story, the characters were well written, and the overall pace was good. The additional characters were a nice input to the story. You knew that Tate didn’t stand much of a chance in a romance like this but the author did well for us to fall for him all the same, hoping for a bit of tension between the love triangle quickly created. A selfless man who gave up thousands along with a successful athletic future to set up a camp in the woods for underprivileged children? A man who’s first date is to feed the homeless? I mean, come on. Give us a bit of a flaw at least. A bit of toothpaste splatter on the mirror isn’t going to cut it.
I really liked Elliott’s sister, Carsen. She’s an eccentric down to earth character that lights up the room, she’s passionate and driven and determined to live her dream. She’s the quirky key to snapping Elliott out of his misery to make him fight for the girl he loves. We didn’t get to spend much time with her character sadly, but even so, she was a great feature.
Overall it was a lovely romance that was perfect for a night in.

Goodreads Review:
Who knew three words held such destructive power? No, not THOSE three words. I’m talking about the evil word trio that’s my own personal kryptonite, that stole my best friend, and took away the only woman I’ve ever loved:
I dare you.
I was six when Darcy Patrick moved next door.
By the time we were eight, we were best friends.
At fifteen, I gave a classmate a black eye for calling her names.
At sixteen, she talked me through asking my crush to prom.
I helped her get over her first heartbreak at nineteen.
Two years later, she returned the favor.
It wasn’t until I was twenty-nine I realized I loved her.
And because I was too stupid to do anything about it,
at thirty, I lost her for good on a dare.
Darcy Patrick is tried of watching her best friend, Elliott Taber, date the wrong kind of woman. When his latest flavor of the month walks out on him, she dares him to let her find his next date. Elliott agrees, but only after Darcy agrees to allow him to do the same.
The dare is on.
The dates take place on the same night.
One is an epic fail. The other is just plain epic.
Elliott isn’t prepared for the onslaught of emotions hitting him as Darcy seemingly finds everything she ever wanted with the man he set her up with. He should be happy for her. He should leave her alone.
But he can’t.
So he makes one more dare….