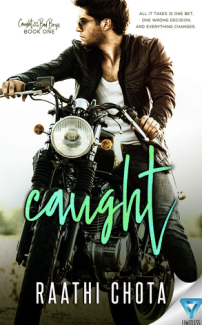 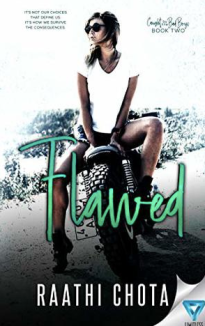 Favourite Quote: ‘”Why me?” I asked once silence took over. He looked at me in confusion but finally understood.
“I don’t know… you’re different,” he said. I rolled my eyes at his cliche statement.  “I watched you…” he said, and I raised a brow.
“Were you stalking me, Gunner?” I turned to him. His eyes widened but turned into that stupid smirk. “When I got to school, all the girls were hooked on me, but you seemed annoyed and pissed. It amused me to see you roll your eyes at me or look at me in disgust. I was intrigued and wanted to know more about you, and this was the only way.”

Lana Willson is the school geek, nerd, good girl with glasses who is top of the class, not to mention her dad is the sheriff. It doesn’t stop her getting bullied though, far from it. The list of tormentors in her school is endless but she doesn’t let them get to her anymore, her focus is to get into Yale and that’s all that’s important. As much as she would prefer it to stop, falling flat on her face is a common annoying occurrence now that is just to be expected and accepted. So when the four most popular boys in school drag her aside to make a bet, she can’t help but feel drawn in; if she can make it two weeks as the school’s bad girl, the bullying will stop for good. Why the sudden interest she has no idea, but Lana has some secrets of her own, she wasn’t always a good girl so winning the bet might come easier than they expected.

‘”What does this make us?” I asked. They stayed quiet for a bit, then looked at Blake, even me. It made sense since he started the bet.
“I don’t know… friends?” he asked, then shook his head. “Look, Lana, if you want to back out of this and return to the normal, boring, bullied, loser, geek-”
“I get it… and no, I don’t. It’s actually fun with you guys.” I smiled. They gave a warm smile in return.’

*SPOILERS*
Okay, now that was a long story. I’m not actually complaining, but it’s a heads up to you all. This review is mostly based on the first book with aspects of the second. I decided to put them together instead of having separate reviews.
The story was interesting enough to keep me going, full of unexpected surprises and twists that I really enjoyed. I should mention that the story does include addiction, alcoholism, mentions rape (not explicit), drugs and murder, so it may be sensitive to some who would prefer to avoid this.

As much as I really liked the story, I felt like there was too many characters by the end which sometimes became confusing and a bit unnecessary to tell you the truth. I felt like the author could have taken the time to build up some of the main characters rather than just including more into their group. The main four bad boys for example – Blake, Carter, Aidan and Ethan, could have had more of a backstory, they started off as the most popular boys in school, but after a while they just blended into the background and didn’t matter so much. There were too many crossovers with the characters but ultimately each one once wronged our main protagonist, Lana, in some way and asked for forgiveness then became a loyal companion. I get that she was the nerd of the school and was bullied alot, but it didn’t make sense as to why each person suddenly wanted to become her friend or more strangely – something more. The clothes she wore weren’t that different.
The story was told mainly from Lana, but at times it included other’s perspective which brought the story to life through various characters.

I didn’t know whether I loved Lana or whether she just confused me. Sex, drugs and rock n’ roll clearly weren’t a first for her when she decided to take the bet to become a ‘bad girl’ which made you think that the nerd title was actually the pretence. Yeah her dad is the sheriff and yeah she’s book smart intelligent, but what else is there besides the glasses that give her that title? And why is she suddenly really attractive to the male species, even in a unicorn onesie? It just didn’t quite add up. She’s strong in some ways, but completely pathetic in others. She’s comfortable around guys but has never been on a real date? I feel like I’m reading the book from Blakes perspective – there is definitely more to her than she lets on which is why I find her so annoyingly fascinating.

In regards to the romance in this story – it’s just as addictively infuriating. You’ve got Levi – the secretive best friend, childhood soulmate, her first love as well as her heartbreak who you know will always come back, Blake – the popular bad boy who was the first to realise there was more to Lana than meets the eye, who pulled her away from her comfort zone and introduced her to a life of excitement as well as danger and addiction who can’t help but feel drawn to her in that adorable ‘first love’ kind of way, Carter – the heartthrob of the school who can (and most likely has) had all of the girls he wants, yet he can’t help but stare at Lana from across the room, an intellectual challenge in the classroom both being top of the class, he asks her to prom night and spends the night next to her knowing he could have pursued her but didn’t – he’s a gorgeous mystery that I can’t work out but I definitely want too, then you’ve got Ethan who wants her to come to his games, wear his jacket and almost kisses her but you don’t know whether it’s part of the bet, or that he actually likes her, AND then you have Benny – the guy who has bullied Lana for years, has physically abused and tormented her who suddenly wants to apologise and change his ways – all the while being in love with her. Lana easily forgives him and then choses him over the rest. Yeah I have to admit, the tears are real, the guilt is clear on his skin and the love in his eyes is definitely swoon-worthy – but really? Is he the only one she can really trust and who makes her happy after all the years of abuse? Simply put – the author included too many lovesick characters and made them all just as good as each other in their own twisted way. I think part of me is glad that Lana didn’t typically fall for Blake; the bad boy that started it all, but the feelings Blake develops for Lana makes you wonder where it’s going to all end. I’m personally either rooting for Carter or Blake! Carter out of pure fascination, Blake to steal her heart.

‘”I don’t know, it’s weird. I used to tease you, and now I’m spending my Saturday with you. I don’t know how Carter and Aidan can be so calm when they used to tease you too, but now…” he said, then looked away. “Now when Blake shows up, he’s all… I don’t know, interested in you. It’s weird because I’ve known you since kindergarten, and I teased you for no reason. Now thanks to Blake, I see the real you. Shows don’t judge a book by it’s cover.”

As evidenced by my ranting above – I clearly couldn’t get enough of this book – which btw ended on a cliff hanger that made me emotional – I didn’t hesitate to purchase her second book ‘Flawed – Caught by the Bad Boys Book 2’ which also ended on a frustrating cliffhanger >.< I’m craving for her next book to come out so I can see what happens.

Goodreads Review:
I’m the school geek. The teenage girl with glasses. The girl who boys avoid because her dad just so happens to be the Sheriff.
All I’m interested in is getting into Yale so I can leave this town and everyone in it behind. Until four of the most popular boys in school suddenly show an interest in me…
Why? I’m not sure. But when they make me a bet I can’t refuse, I shed the good girl skin I’m in just to prove to them I’m not as innocent as they think I am.
Only, things start to go wrong. Really wrong.
As I stare down at the grave in front of me, I know my life will never be the same again—not while I’m caught up in this web of lies, deceit…and murder.