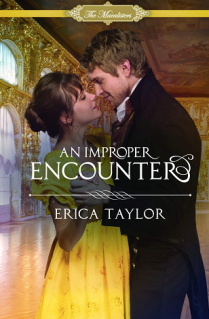 Favourite Quote: ‘”There it is,”he said softly, and she glanced up to meet his eyes. “Your smile is truly wondrous. Rare, but worth the wait.”
“I smile all the time,” she replied.
“True,” he admitted. “But it is mostly a false expression devoid of any true emotion. Occasionally, a true manifestation of joy peeks through and light up the blues in your eyes.”
“That’s preposterous,” she replied.
William smirked. “If you say so.”‘

Lady Sarah Hartford, also known as the Marchioness of Radcliff, daughter and sister of the Duke of Bradstone, is tired of playing a part in society as a proper, respectable widow in grey. For too long she has been the role model mother figure to her siblings, the refined and established woman of status in society, grieving a husband who she discovered too late, was cruel and heartless. Sarah has titles and too much means with little to do with it, so when her sister-in-law, Lady Lydia, dares her to take a lover at an inn, she can’t help but feel drawn to the challenge. Something scandalous to bring a bit of excitement back into their lives. Particularly when a large handsome Scottish man enters from the rain who immediately has Sarah’s heart beating faster. She decides to play the part of his wife to take the opportunity to spend time alone with him to get to know her conquest, but William Gordon provides her with far more than she ever expected. It took 3 days of traveling together to make them realise that the pull between them was evident from the start, and they quickly realised that neither of them was willing to part ways to return back to reality. Unfortunately William’s past couldn’t be ignored and his unwanted family connections dragged him down another road he didn’t want to take, pulling him further away from Sarah.

I really enjoyed this historical romance. The story is told from both perspectives of Sarah and William which really brings the emotions to life. The romance between them is beautiful and draws you in quickly with every look, facial expression, and witty conversation that has you wanting more. The characters are full of passion, desire and a love so entwined that you’ll not want to put the book down to make sure it ends right. The story itself it really exciting and has a lot of twists and turns that you’ll not see coming which really pulls you in.
I really liked the characters in the story, although you’ll only really get to know Sarah and William, which the author spends a great deal of time to build up their characters, the other family members and associations they meet on their journey have just enough backstory to know who they are and their connections to our main protagonists.
Sarah was a well written woman within the 1800’s, she’s determined to play her role well within society and the haute ton, with a proper, scandal free lifestyle, a role model to her siblings in preparing them for when they’re ready for them to come out in society and married to a respectable suitor with status and rank. So when her husband dies and leaves her with means and a lifetime full of grey, she can’t help but feel grateful that her he has gone but has come to accept that she has a cold and lonely future ahead of her, barren and miserable. With her siblings off getting married and having children, Sarah finds comfort around Lydia who accompanies her with the same title as well as the same widow status. Lydia has a great personality and keeps Sarah divulged in distraction and purpose but it isn’t enough to fill the empty void in her life. It’s only when William enters the picture you see her character change into something more free and relaxed.

‘Her face was bright with humor. “I’m lying in a stream,” she laughed. “I fell off my horse!”
He smirked. “I saw.”
“Of course you saw!” she exclaimed, splashing her arms into the water. “You’ve seen me today at my absolute worst! Muddied and soaked. I can honestly say, I have never!” And she was doubled over in laughter again.
He offered her his hand, and she took it, pulling him down toward her, catching him off-guard, and he fell to the water beside her.
“Now you’re in the stream too!” she giggled, splashing him.
“Oh, now you’ve done it,” he warned, fighting the smile on his face.’

I really liked William as a character. For a man of means, he isn’t afraid to go for what he wants, whether it’s walking away from his family’s name and legacy out of principle or training as a surgeon to help in the war to give himself a higher life purpose. He’s still a gentleman of the highest standard with a witty personality to boot, and will put his duty above all else when he has too. *SPOILERS* Even if it means walking away from the one he loves. I have to say, it broke my heart a little when he showed up with another woman on his arm but I totally respect his decision for it. He has a fun charisma about him which is almost daring for his position, he doesn’t hold back on his feelings. His love for Sarah is evident in everything he does and you can’t help but die a little inside when you know nothing can come of it. Or can it? You’ll have to read it to find out the ending!

‘”It would be fine with me, you know,” he said with a grin, rising from the table and moving toward her. “Tis not farfetched that two lusty women-“
“Will, if you finish that sentence, you will find yourself traveling alone to London.”
He laughed. “I’m only teasing, Sarah,” he said, smirking. “Doesn’t anyone ever tease you?”
“Too often,” she sighed.
“What you need is a rough-“
“Do not finish that sentence either,” she warned.
His lips were on hers again, and she wound her arms around his shoulders and neck, clinging to him. His kisses were not gentle, but she did seem to not mind. He backed her up a few steps until she met the wall behind her. He leaned into her, his body hard with a hunger that had not been dispelled throughout the night. She pushed against him, and he pulled away, his eyes blazing.
“Why do you keep kissing me?” she wondered out loud, searching his gaze.
“You kissed me first,” he replied, claiming her lips again. “And you never told me to stop.”‘

Goodreads Review:
Lady Sarah Hartford is beautiful, wealthy, widowed, and bored. After agreeing to a scandalous dare to seduce a stranger into her bedchamber, she meets the devilishly handsome doctor, William Gordon. Though both keep their true identities hidden, an intense romance blooms between them, and Sarah finally feels like she could be happy again.
After a three-day affair ends when they arrive in London, William promises to reunite with Sarah after dealing with his ailing father, the reason to which he was summoned to London. But three months pass, and Sarah begins to lose hope of ever seeing her lover again.
Until one day, when he arrives on her doorstep, married, a duke, and with a pregnant duchess in tow. As the pair try to untangle truth from lies while keeping their history a secret from everyone around them, they realize they may never be together.