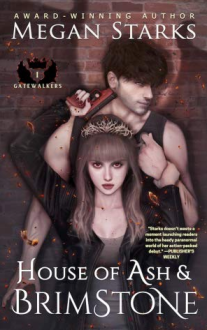 Favourite Quote: ‘”Can we chase the sun?” she pleaded. “Can we, before it’s gone?” He bowed his head and bent around her, shoulders flexing. His wings unfurled with the sound of a thick sail cracking. They spread impossibly wide, dark and leathery, but full of blood and life. Wind whooshed around them, but offered no cool relief. The breeze was hot, a sigh of summer. They were close to taking off. His lips touched her ear. “Gigi, you are the sun,” he teased. With a push, they were in the air.’

Half demon Gisele has been training to be a bounty hunter through her adopted family since she was 14 years old. She would give anything to run her own company, but when another demon is hired out of the blue to help her with her assignments, she can’t help but feel like her job skills are being questioned. Shade seems to show up wherever she goes, and his unwanted help infuriates her. Why is he here and where did he come from? Despite her best investigative efforts, she still can’t figure him out. All she knows is that he’s dangerous and she definitely shouldn’t trust him.
When a private client offers her an opportunity to start fresh, she can’t help but grasp at the chance, only to discover the item her client desires is actually a curio portal to Hell which she accidentally opens on the job. Something triggers and Gisele starts to have dreams about Shade as a child growing up in Hell, which of course is impossible, surely she would remember such a thing? When her client sends a demon with a life-threatening message, Gisele has no choice but to follow Shade into the depths of Hell to discover the truth about her past once and for all.

‘Gray eyes met her red ones coolly. Utterly impassive as usual, he gave a lazy, two-fingered salute. She took in the sight of his thick, wind-tousled hair, an ashy brown so dark it was almost black, and let her eyes rove the taut lines of his leather clad upper body. Heated attraction bloomed in her belly, but infuriation flared in her chest. The thought must’ve shown on her face, because his lips curved into a rare, sun-bright grin. Her pulse soared, and she swallowed against the fluttering in her throat, loathing herself for wanting what that stupid smile promised.’

I have to say, enjoyed this book far more than I thought I would. I thought the story was great, the characters were well written and the atmosphere was brilliant. A Minotaur that takes the role as a roommate/ body guard, howler demons from the realm of nightmares, an elghoul that takes pleasure in reliving your greatest fear, a flesh-eating balvelgr medical examiner with a twisted sense of humor, not to mention a soul-bound dragon in love. What more could you want from a fantasy story? And that’s just what’s lurking on the surface. The story continues to get better as they dive into the depths of Hell.
I wasn’t sure what to think of Gisele, on her own at first she was determined, strong, intelligent and calm in the face of danger, but I felt like whenever Shade was nearby, she became weaker and emotional. I wasn’t sure whether it was because it was a part of her character, or whether Shade just made her so mad all the time she couldn’t think straight. Even when she started developing feelings for him, she would still make stupid decisions at times and although Shade took the blame, it was definitely because she wasn’t thinking clearly.
Shade was an enigma wrapped in leather. It’s clear he’s dangerous and fresh out of the depths of Hell, but how dangerous is he really when he’s so utterly smitten with Gisele and following her around like a puppy? Without spoiling the plot, I have to say, he really needed to step up his game. He’s clearly more than capable of looking after himself, but whenever he’s around Gisele, he just messes things up instead of being the protector he choses to be. His dark past haunts him regularly and his determination to shield her from everything shows us who he truly is, even if Gisele can’t see it.
The way the two characters dance around each other is maddening, you don’t know whether they will kiss or end up with Gisele pointing yet another gun to Shade’s head. It’s enough to drag you further into their world and the mystery surrounding their connected childhood.

I really liked how the author set the scenes in the book, it was dark, mysterious and descriptive enough to place yourself there without taking you away from the characters, whether it was roaming the isolated streets, being trapped in a dark broken elevator with an uncontrollable demon in the morgue basement, a simple empty apartment or traveling through the various dimensions of Hell experiencing the dark twisted magical pull of the sins each gate represents. It’s brilliant and capturing, you won’t want to put it down.

‘By the time they reached the Red District, a scarlet moon gleamed against a murky, velvet sky, devoid of stars. Beast had said once he’d stay with her until the blood moon. She’d assumed he’d meant one on Earth. But here they were, faced with a world and a moon wet with dripping blood. Unlike the White District, the Red District was filled with bodies. Both writhing and still. Corpses lined the street like guardrails, and groups of demons fought around them. The streetlights had been shattered, casting the area in the sickly glow of the moon. Glass and blood glittered on the ground. There were no glossy, rippling skyscrapers here, only squat, chipped brick buildings splattered with gore and graffiti. The Red District was like taking a ride through the apocalypse, and she was eager to leave it.’

Overall I thought it was a fantastic story and I would happily pick up another one of Megan Stark’s books!

Goodreads Review:
Hell has come to collect…
…but Gisele Walker has no plans to pay the debt.
As a half-demon paranormal bounty hunter, Gisele is used to flirting with death, but stealing a curio and opening a portal to Hell’s demon court is more than your average day job.
Now, she’s partnered with an infuriatingly handsome demon, Shade, who has more levels of grey than she can count.
Who can she trust to help save the city as Baltimore burns to the ground and ghouls roam the streets?
With a white-hot attraction burning between them and secrets blocking their path, Gisele must face her past and venture into the twisted heart of the demon royal court.
But with no memory of her past…
…will she be able to save their future?