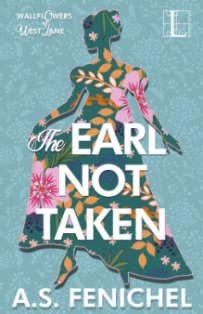 Favourite Quote: ‘”And what of you with your bad behaviour and stained dress? You’re not exactly on your way to becoming a well-bred lady.”
“I never claimed to be. Besides, I don’t think my stumbling and ruining a dress is comparable to what you’ve been doing with who knows who. You’re a scoundrel, I’m just a lummox.”
His frown deepened, and something dark glared in his eyes. “You have no right to judge me.”
“I only tell what I see.” Her heart pounded in her throat.
He stepped toward her. Poppy ran without looking back.’

Even as the daughter of a Count, Poppy Arrington could never fit into her role in society. She’s opinionated, naive, stubborn and extremely clumsy. Her parents continually remind her that they wanted a boy to take over the estate but they were stuck with her. Determined to at least push her into a successful marriage, they decided to send her off to boarding school to learn proper etiquette of a fine lady. Unfortunately for them, Poppy didn’t learn a thing, instead she formed an inseparable bond with three other quirky girls at the school, her fellow Wallflowers. When one of her Wallflowers, Aurora, is thrown into a horrible marriage straight after boarding school full of pain and suffering for three years, all of them can’t help but feel relieved when her husband dies. The Wallflowers make a pact to never let another man hurt any of them.

When Faith announces that she is to wed a mysterious Duke of Breckenridge, Poppy and the other Wallflowers are concerned. No one has met this Duke before, he had a secret life living in France and proposed to Faith via letters through her mother. Something feels wrong and Poppy is determined to find out the truth, even if it means teaming up with Aurora’s obnoxious brother Rhys, the new Earl of Marsden whom she can’t stand to be around. The two of them, along with the Wallflowers, spy their way through the society of the ton to gather answers.

It’s Valentines day after all, my excuse to pick up a new historical romance that I have on my list! The Earl Not Taken started off really well. Four high class girls sent off to a boarding school to learn how to behave, instead becoming the inseparable Wallflowers of West Lane. Poppy adores her Wallflower girls, they’ve been through a lot together, but when she has to stand by and watch one of her precious girls get beaten and dragged through a marriage of pain and misery, her resolve that all men are terrible stands true. Poppy is determined to make sure none of her Wallflowers ever go through that again, and she herself is determined to never marry and live a life of freedom. She will never be made into a man’s possession.

‘”I’ve never liked the demands of society, and you have continually noted my lack of social graces.”
“I have seen you fumble around the ballrooms and embarrass a few hostesses. Yet your card is always full and you never lack for male attention.”
The snick of her cup in the saucer was the first sign he had said something wrong. “I go to balls because it is required, and I dance with stupid men like you for the same reason. My card is full because my father has placed a giant dowry on my head like bait for the fish. You know nothing of my troubles, Rhys Draper. All you know of is your fancy title and the multitude of women who want to be the next Countess of Marsden.” Standing, she forced him to rise. The change in her demeanour was enough to set his head spinning. “You don’t see anything. You and your kind always think the worst of those ladies trying to find husbands. Has it ever occurred to you that they may want something else but have no options?” She grabbed her wet overcoat and umbrella and was out of the door before he had time to respond.’

Whilst I like this premise of Poppy’s resolve, it’s also infuriating to listen to over and over again in the story. There is a lot of emotional stubborn repetition with Poppy that after a while, I found it difficult to like her. Yes Poppy we understand all men are bad in your eyes, but seriously? Grow up. I wanted to shake her at times. She is so naive and difficult, I’m surprised she gets any attention from men at all – even for her title. I actually felt sorry for Rhys, and honestly, well, Rhys kinda went flat for me right at the start. He fell for Poppy because she was the first girl who wasn’t infatuated by him which starts off as more of a conquest and quickly turns into desire. He walks around with his heart on his sleeve, which is off putting. For once I didn’t like how often we had his point of view shared, it was too much jealously, pining and teenage infatuation for me. Take away the social historical hierarchy, this book could easily be put into the YA teen romance category.

Putting aside my resentment for the overall romance in this book, I really liked the friendships that came with it. It’s clear that all four of the Wallflowers are completely different in personality but that doesn’t stop their bond, I love their individual natures and how they all fit in their tight little group. Poppy being uncoordinated and prejudiced, Faith with her prim and proper exterior but full of mischief, Mercy being agile and level-headed, and Aurora, who comes across as the mother of the group with her strong beautiful disposition. Their resolve to stick together is sweet, I would have liked to have seen more of their exploits together.

With all that in mind, I do admit that I didn’t put the book down and finished it in one sitting. The ending was entirely predictable but I guess there was a small part of it that reminded me of pride and prejudice with it’s strong-willed characters that kept me going. I also enjoyed getting to know the additional characters that the author added in which were well written and extremely likeable, Rhys’s friend Garrett and his direct playful personality, the mysterious Egyptian Mr Geb Arafa and his remarkable home full of art who isn’t quite accepted in society as an outsider, not to mention the secretive Duke of Breckenridge himself, it’s enough to keep you wanting more.

Goodreads Review:
Finishing school failed to make a proper lady of Penelope Arrington. But as a Wallflower of West Lane, Poppy has a far more vital role—she and her three best friends have made a pact to protect each other from the clutches of dangerous, disreputable men. So when one of them is about to be married off to a duke sight unseen, Poppy makes it her mission to divine the prospective husband’s true character. If only she didn’t require the aid of London’s most unsuitable rake.

Rhys Draper, Earl of Marsden, has known the headstrong Poppy since she was a young girl naïve to the ways of men. To her eternal chagrin—and to his vague amusement—they have been at odds over the memory of their embarrassing first encounter all these years. Now, with his services in need, Rhys sees a chance to finally clear the air between them. Instead, he is surprised by the heat of their feelings. If the two do not tread carefully, they may end up in a most agreeably compromising position…