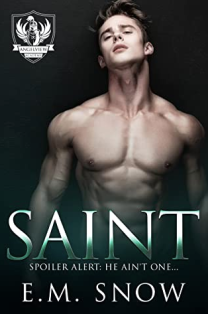 Favourite Quote: ‘“Why am I doing this to you?” he repeats the question I’d asked when I thought I had the upper hand. “Because you’re mine, Mallory. To break. To hate. To do whatever the fuck I please to until you give me what I want.”
“And what’s that?” I whisper.
“Leave.”‘

Mallory can’t help but feel excited when she opens the letter inviting her to attend a prestigious boarding school, Angelview Academy, in California, full scholarship room and board included. She knew she should be more cautious, not only did she not apply to the school that she didn’t even know existed until now, she also had no idea how they were able to find her after she ran away from Rayfort a year ago. Away from the past, the pain, heartbreak and the only family she ever knew. Angelview is the perfect way to start fresh and push forward to make something of herself.
Unfortunately Mallory didn’t realise what she was walking into when she entered the Academy. The whole place was full of the rich and famous, old and new money that saw her and her scholarship as a means to bring the school’s reputation down. So much for keeping a low profile. It also didn’t help when she confronts the most powerful student in the school after finding him bullying a girl to tears. Little did she know in that moment, her life was about to make a horrible turn when she becomes his next target.

‘Entitled pieces of shit like this guy get away with everything, and it’s not fair. He deserves punishment. He deserves humiliation. He deserves pain. I should let him go. I know that I should let him walk away and put this whole thing behind me. But I can’t. I just fucking can’t. There’s an apple on the table next to me. I pick it up, and without thinking my actions through, turn on my heel and launch it at the back of his head. He lurches forward a step at the impact, and the apple falls to the tile floor with a bruising thump.
The entire hall falls deathly silent. Slowly, the blond boy twists around to stare at me, wrath and disbelief staining his gaze. Gabe and Liam flank him, all three setting their sights on me as if preparing to unleash holy hell. I know who the blond guy is without anyone needing to tell me.
Satan himself.
Saint-Fucking-Angelle.’

I’ve really been in the high-school bully romance kinda mood lately. Distracting easy reads through this lockdown that I can’t help but enjoy. ‘Saint’ came up on my recommendations and I thought, why not. I’m not usually drawn into the whole ‘bad boy with his shirt off’ covers but the blurb intrigued me enough to cave.

The overall storyline is engaging as well as it is a typical teen bully love/ hate romance. The story is told from one perspective which I found somewhat refreshing. Mallory is a teenage girl running from a dark past, although you don’t find out the full extent of why she ran away from Rayfort until later on. Our protagonist is keen for a fresh start to push past her haunting memories, she’s determined to do well and fights to never let her past or emotions get the better of her. Her goal is to get through school with as many qualifications as possible to give her a positive future, no matter who gets in her way. Her determination to stand up to Saint and the students of the Academy is a great aspect of her character, she doesn’t let them get her down. I particularly liked her friendship with Loni, it’s both sweet and strong. Mallory is so used to being isolated on her own, she sometimes doesn’t know how to react in friendly situations and expects that she’ll be left on her own when things go wrong. It’s so innocent and cute.

Saint was just as you imagine him to be. The ‘God’ of the school who doesn’t mess around to show his expected entitlement with his family wealth and reputation. No one stands up against Saint and his two accomplices Gabe and Liam. His control over the school and it’s students is intimidating, when he puts all his attention on trying to control Mallory, he just becomes frustrated and obsessed that he isn’t getting his way. Unfortunately it wasn’t enough for me to understand why he chose to pursue her from the start. As much as I love the slow burn romance, I needed to see more chemistry between them. It just needed something more rather than just lust. Maybe the odd chapter with Saint’s perspective would have helped. It would have been interesting to see his point of view and what mischief he gets up to besides following Mallory around.
Hand on my heart, I was actually rooting for Liam throughout the story. His quiet observing broodiness was enough to draw me in to him, and it was nice to see a connection between him and Mallory that just didn’t exist with Saint. Liam’s jealously throughout the book was both adorable and annoying, you wanted to shake him silly for his hot/ cold attitude. Their secluded swimming sessions were just teasing for me.

‘I make it to the other end of the pool, then flip over and swim back. When I pop back up, I let out a squeak of surprise when Liam’s face is right next to mine.
“What the hell, Halloway?” I gasp.
He doesn’t say anything at first, just studies me with an unnerving intensity that makes me want to shrink away from him. I keep myself steady, though, knowing any show of weakness would just be more ammunition for him and his asshole friends.
“What’s your deal, Ellis?” he asked, his tone hard, but not necessarily cruel.
“I… I don’t know what you mean,” I murmur like a fool.
He rests his arms on the lane rope between us and leans closer. “Why are you so curious about me?”
I roll my eyes. “I was just asking about your tattoos, not digging for a background check.”

Aside from the high school bully scene primarily playing out in this book, the secrets surrounding Mallory are an interesting addition to keep you on your toes. You’re constantly reminded that something bad happened in the past that she blames herself for, with her drug addict mum on the run and the mystery that is James.
Overall I liked the story enough to continue reading the next part of the trilogy, MALICE which was just as engaging and ended on another cliffhanger. The final book isn’t out until July 2020 so I’ll have to wait and see how it ends!

Goodreads Review:
At Angelview Academy, Saint Angelle is considered God.
But don’t be fooled by his ridiculous name or that pretty face because Saint? He’s as wicked as they come.
I should know.
I’m the new girl who pissed him off.
The nobody who called out his crew of vicious tyrants.
The mortal who wouldn’t bow then and sure as hell won’t now.
Saint swears I’ll regret it.
He vows to own every inch of me.
He even promises to make my senior year a living hell.
I don’t believe him, though.
Because if angels can fall, so can so-called gods.
And I want to be the one to bring Saint Angelle to his knees.