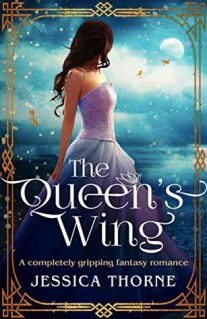 Favourite Quote: ‘The herald announces me, that strange litany of names that don’t seem to fit me, and yet are bound up with my life and my future. I descend the staircase, trying to shake off the weight of inevitability. This is why I’m here. This is no romantic event. No fairy tale. I’m a game piece on a vast board. I’m not even a real wife. A political marriage, an alliance, and a promise.’

Bel would do anything to complete her training and get up in the air on her Wasp, even her governess can’t hold her back from being who she truly is, Vairian soldier like her mother with a desire to fly. When their enemy destroys the Vairian capital planet killing the entire royal family, leaving Bel’s father the next in line to be King, Bel’s life is thrown upside down. She is the last Princess. The last means to bring an alliance to her people. With no choice, she puts her duty before her family, her need for flying, and the one she loves, to marry a stranger from across the stars; Conleith, the widowed Anthaem of Anthaeus. Only Con isn’t the old ruler she expects when she finds herself standing in front of a young attractive engineer with oil in his hair and a smile just for her.

‘”You don’t seem happy, Princess,” my partner tells me, from behind a gilded mask in the form of a lion.
“Don’t I?” I ask, taken rather aback. He’s the first to notice.
“I’m told brides often are happy?” There’s a teasing note to his voice that is rather attractive. I peer at him a little more closely, trying to place his voice, his eyes, the line of his jaw. In answer, he twirls me around so I don’t have a hope. I laugh, unable to help myself.
“If I had the chance to win your heart,” he whispers. “Just one chance, I’d never let you go. But it’s too late already, isn’t it?”
The song finishes and he steps away, leaving me bereft. And shocked. He’s gone as quickly as he had appeared.’

Wow. Damn. That was really good. I was given a copy of this book for a review years ago, yeah.. years, I never got around to reading it being so absorbed in other books that kept coming up on my reading list! I hate that it took me so long to read because this book was amazing. I actually want to apologise to the author for taking so long with my review! Sorry Jessica!
I loved the unique characters, the scenery of both planets as well as the brief trips through space, the fascinating plot, the heartbreaking romance, the mystery as well as the technology incorporated with a hint of magical enchantment from an ancient civilisation… all of it wrapped up in a neat ribbon that worked perfectly and gripped me until the end. I found I kept rushing forward in the story to find out what happened next and had to go back and re-read everything again. I wouldn’t be surprised if I read this one again very soon to fully absorb everything I most likely missed.
I was worried at first picking this one up after reading Mageborn (another fantasy written by Thorne), she couldn’t quite capture the characters emotions and connections in it, but she completely outdid herself in this one for me. I fell in love with the characters, even the love triangle thrown into the mix which I usually hate. I’m not ashamed to say I cried.. Cus I did.. For good reason.

I loved Bel, yeah she was selfish and wanted to run away from her duty, but let’s be honest, you would feel the same. She was a soldier in training who lived to be in the air, a trait she took after her mother. Bel never expected to be thrown into a royal arranged marriage at the other side of the universe, who would? Being torn from her life, family, passion for flying and the slim chance of being with the one she loves, only to be relocated to another planet filled with death threats, duty, tight dresses and a fiancé who is an attractive mystery she can’t work out. The build up in her character is well written, she’s a young emotional mess who can’t live up to her expectation, but slowly becomes the solider she was training to be and a beacon of hope to her new kingdom.

‘Petra waves me to silence. “Don’t. All this.. you’re doing it for him. That I understand.”
“Then you know why I have to get him back. Otherwise, everything, will have been pointless.”
“We can’t have that. We are both warriors, my princess. It’s what we’re trained for. Vairians by blood.”
I grin. “And stubbornness.”
“That most of all.”‘

Conleith was an intriguing mystery that you can’t help but feel drawn too, even with Bel’s feelings for Shae so apparent. The way you’re introduced to Con is enough to make you think twice about her future and who she will find true happiness with, a love triangle that will tug at your heart. I loved his youthful passion for engineering which often distracts him of his duty as the Antheaum ruler, as well as his ability to control a room with a look giving him the status and respect of his people. His interactions with Bel are young and sweet, the way he blushes when around her brings an innocence to his personality that you want to discover more of. He definitely captured my heart when he gave her his wedding gift.

Thorne did a great job at setting the scene with each location, no matter how brief, whether they were traveling across the stars, walking through the castle for various events, taking shelter in the forest, or visiting the ancients in their sacred underground chamber. The small featured elements were enough to put yourself in the scene.
The detail that went into the ancient technology was fantastic, I honestly couldn’t keep up some of the time but it was worth reading about, a simple bracelet that became a means of communication and tracking device, flying machines that were adapted to the flyer, people being turned into programmed monsters known as Mechas with nodes to make them superhuman, not to mention the mind link with the ancients that allowed Bel and Con to connect to the world as well as each other on a whole other level bringing them closer.

To summarise, if you hadn’t picked this up from my review, I adored this book and I would highly recommend it to anyone who enjoys a good YA fantasy with action, romance, a bit of sci-fi and a storyline that will keep you guessing at every corner. It can be read as a standalone or if you like, the story doesn’t have to end here, Thorne’s next book in the series takes on the perspective of Bel and Petra 🙂

Goodreads Review:
‘I was born to fight,’ I used to say. But now I know it isn’t true. I was born to be a pawn in the great game of royal houses, married to someone – anyone – my family deems suitable…
Bel would do anything to spend her days alongside her best friend and childhood sweetheart Shae – training in the art of Vairian combat, hoping to some day live up to the legacy left by the mother she lost as a child.
But when a mysterious and deadly attack on the capital lands Bel’s father unexpectedly on the throne, her life is forever changed. In order to secure her father’s new empire, Bel is forced to travel to the distant land of Anthaeus to marry its recently widowed ruler, Conleith.
For any other young woman the chance to become royalty would be a dream come true, but for Bel, the rigidity of court life is like a prison sentence. And while Conleith is an unexpectedly intriguing – and attractive – puzzle… could she ever love him when it would mean turning her back on her feelings for Shae, her first love and last connection to home?
Then a brutal assassination attempt nearly takes her life, and Bel learns that there’s more on the line than just her happiness. Is it the same faceless enemy who attacked her homeland and, with dangers around every corner, who in the palace can she trust?

One thought on “The Queen’s Wing”