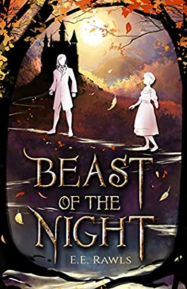 Favourite Quote: ‘”This wound will kill you,” the man told him. “But I have something that can freeze the wound in place so that you will live. If that is what you want?”
He nodded slightly.
The man pulled something out from his robes: a band of silver with a ruby in the shape of a rose, and clicked it around Varick’s neck.”This mage artifact can keep you alive, but only under one condition: you must never fall in love. If you do, the spell will break.”‘

Rosenrot can’t stop the nightmares of what she saw in the clearing 6 years ago. Nachzehrer. The Beast of the Night. When she first moved to the small hidden town of Freudendorf for her drunken father to escape the debt collectors, the villagers talked about a forbidden castle, a cursed forest, and a beast that dwelled in it. Curious to see for herself, she hiked through the forest until she came across the castle, and the very beast everyone warned her about. The shock gave away her position in the bushes and the second she locked onto the silver eyes of the beast, she ran away faster than she had ever done in her life and swore she would never travel too far into the forest again.

When her father’s debt collectors finally find them, Rosenrot discovers a farewell note from her missing father and her life is suddenly sold for 15 years of accumulated debt. Accompanied by a zombie like butler, she finds herself following the same broken trail through the forest from 6 years ago that leads straight to the forbidden castle. Her new employer is none other than Lord Varick, the Beast of the Night.

‘Castle… she didn’t know of any inhabited castle in the western foothills. A sea of red soon lined either side of the path. Twigs clawed down toward her from their bleeding canopy. The memory rushed back: the path she had wandered as a too-curious girl. The wailing of a creature wrapped in black. Twin glowing silver eyes.
“The forbidden castle? Surely that isn’t the one you’re taking me too, is it?”
“Forbidden? Hm.. ja, it has been… a long time since… a human visited.”

I was craving another Beauty and the Beast retelling when this book popped up on my kindle recommendations. I fell in love with the cover, the colours drawing me in instantly. The book itself isn’t very long, in fact I think it only took me a couple of hours to finish. It has all the key elements of Beauty and the Beast that you’ll expect; beauty, a beast, enchanted creatures, a small town, a curse and a magical being that sets everything in motion who is never too far away observing the chaos they created. But it has its own unique twist that had me drawn in. Even when I knew how it would end, I was still questioning how it could turn out when we discovered the truth behind the rose necklace around Lord Varick’s neck.

I do have to say, was disappointed in how rushed it all felt. The author didn’t give us enough time for our characters to get to know each other and for the romance to fully bloom into something special. It felt like the whole experience between them took days which wasn’t enough to build up the characters or the connection between them. A few small ‘adventures’ outside the castle collecting mushrooms, exploring the salt mines and a disguised visit to the village festival was all it took which felt lacking. It needed more of a spark but I did enjoy the innocent gestures between them when they finally accepted each other’s friendship. You could feel the trust growing and the changes in Lord Varick’s character when he began to accept that he was more lonely than he realised without Rosenrot around.

As much as you didn’t have a lot of time to get to know the characters, I did like the how they were uniquely different from all other Beauty and the Beast spin offs I’ve read. As much as I didn’t like her name, Rosenrot liked being different even with one missing arm. She preferred having short lavender hair when all the other girls had long natural colours, she was content in being on her own and knew what she wanted which was to get lost in a library and not marry unless it was for love. Her acceptance that she will have to pay off her fathers drunken debts didn’t affect her overall character or attitude, even when she found herself in the service of a cursed lord in a forbidden castle on her own.
I did feel like her arm disfigurement was unnecessary for the most part, there was no backstory to it or why, it just was. It’s like the author wanted to create a heroine with flaws that allowed her to stand out but failed to make us emotionally invested in it.

I actually liked how our very own Beast was a vampire. Or rather ‘Vempar’. Not the typical blood sucking, swoon worthy, invincible, immortal teenage vampire. But rather a lonely isolated ill-mannered lord with added strength and healing abilities. Not undead, but rather another race of the Altered. Whatever that means. It made a refreshing new ‘beast’ from the typical werewolf type creature we’ve come to accept and his Vempar aspect didn’t completely overpower the story. So much so, I honestly wouldn’t put it in the same category as a vampire romance at all.
He has lived on his own surrounded by servants since he was nine years old, hidden from the town and the horrors surrounding the death of his family. Varick’s obnoxious cruel behaviour comes from the reclusive privileged upbringing that he soon adapts around Rosenrot and the kindness she brings to the castle. I liked how he went out of his way to keep reminders of his family around him, and chose to embrace the memories he had with them rather than hide away from it. It was the one part of his character that really stood out to me.

‘Rosenrot placed a handful of maple leaves on a table and twirled to face him, the fabric of her gold and white dress turning with her. She spread her arms wide, “With this! You can’t celebrate the Autumn Festival without a festive house.”
Varick stared about the dining room. Colourful centrepieces decorated the mantles and the long dining table: gourds of autumn greens, yellows, and oranges forming fantastical shapes between rings of bright leaves. A memory flashed back of that day long ago: he and his family celebrating the festival in this room, the castle filled with colour and life and cheer..
“Do you not like it?” Rosenrot said when he didn’t speak.
“Oh.” He shook himself back to the present. “It’s beautiful. The most beautiful this place has looked in a long time.” He meant it, in more ways than one, watching the firelight play on the gold leaves about her dress.”‘

One thing I did love was the world building. The author was able to bring the scene to life and fill it with beautiful colours that made it always feel like autumn, whether it was the pumpkins that were always present in everything they ate, the autumn decorations around the castle that his family had enjoyed on their last day together, the walks through the forest under the colourful leaves, the village festival that was bright and cheerful with it’s autumn costumes or sitting in front of the fireplace creating a warm cosy atmosphere. I adore autumn which made me love this aspect of the story even more.

‘Each footstep crunched through layers of autumn leaves. Birches stood white against the cacophony of orange and gold smothering the forest canopy. The sky was a sea of clouds, trapped by the mountaintops surrounding the valley, and growing darker by the minute, the fading light casting a strange glow and turning the autumn forest almost eerie.’

I would have liked to have had more history surrounding the whole Altered and the rest of the supernatural beings that made an appearance. It was a bit confusing and messy in places. The Nymiads for example were the ‘enchanted beings’ around the castle, but we weren’t really told anything about them, only that they worked for Lord Varick. For some reason. I just needed more. What are they, who are they and where did they come from? They were their own mystery that didn’t quite add up but were just there and nothing to do with any curse or magic surrounding the story.

Overall I liked this fairytale spinoff, it had some great features that I would recommend to anyone who loves Beauty and the Beast retellings as much as I do just to experience a new perspective on the tale. It wasn’t the best version I’ve read by any means, but I still enjoyed it!

Goodreads Review:
A one-armed girl. A lord hiding a curse. A dark secret with the town’s fate hanging in the balance.
A Beauty and the Beast retelling with an Austrian twist and a new type of curse.
When Rosen moves to Freudendorf—a secluded town in the Alps—she does odd jobs to earn a living. That is, until her dad suddenly vanishes and the debt collectors come to call: taking her into slave labor.
But just when all her hopes and dreams are shattered, a frail zombie-like butler purchases her: taking her to serve Lord Varick, who currently resides in the forbidden castle near the salt mines, where the Beast of the Night is said to roam…
Varick is handsome, with an attitude that’s the exact opposite. The servants aren’t human, and the castle itself is an ugly wreck. But if Rosen cannot solve the dark secret beneath Freudendorf, and the curse holding Varick’s cold heart, then both they and the town will fall prey to a waiting evil—and worse, have no memory of it.