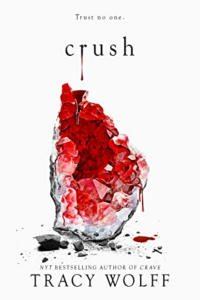 Favourite Quote: ‘”Grace?” he says, looking deep into my eyes, and for the briefest moment, I see something there that makes me catch my breath. And also wonder if I’m imagining it.
“Yes?”
He circles his finger again, and the music switches from Flo Rida to the opening lyrics of Walk the Moon’s ‘Shut Up and Dance’. And it’s so clever, so ridiculous, so Hudson, that I can’t help bursting into laughter. Right before I decide, screw it, and let him dance me from one end of the laundry room to the other. When the song finally comes to an end, Hudson lets me go, and we both stand there grinning at each other.
“How do you know I love that song?”
And just that easily, his smile fades away, leaving nothing there but an emptiness so stark that I feel it deep in my chest. Even before he answers, “So you really remember nothing of the time we spent together?”‘

Grace can’t understand what’s happening. She’s lost almost four months of her life stuck inside stone. Not just any stone, stone she created out of thin air to protect Jaxon from his evil brother, Hudson. Stone she incased herself in being that she is a gargoyle. Not just any gargoyle, but the first gargoyle to be seen in a thousand years. As if that wasn’t enough, she finds herself blacking out and losing time, waking up covered in blood that isn’t hers and a part of her can’t stand being around Jaxon anymore. It quickly becomes clear that her gargoyle self didn’t get rid of Hudson at all, in fact, he’s closer than any of them could ever realise.

‘Jaxon’s words hang in the air between us for several seconds, the power and horror of them an actual physical presence that has my body tensing and a chill running over my skin.
“What does that mean?” I finally whisper, the words falling like grenades into the silence between us. “Is Hudson here? Did I bring him back with me? Is he persuading me to do things?”
“He’s definitely here,” Uncle Finn agrees. “The only question is what we do next.”
“Well, where is he, then?” I demand. “Why haven’t we seen him?”
I look from my uncle’s sad face to Jaxon’s enraged one, and a weight starts to grow in my stomach. A weight that gets heavier and heavier with every second that passes. A weight that nearly pulls me under as the truth crashes into me.
“No,” I tell them, shaking my head as panic and disgust and horror wrench through me all at the same time. “No, no, no. It can’t be.””

You know what, I was curious to see where Crave left off and find out what actually happened with Grace, even though I thought I could predict what would happen next with it being typical vampire romance and the first book taking obvious inspiration from Twilight. It took a few months but I caved, and I have to say, I was not disappointed at all. This second instalment was significantly better than the first, I fell in love with this book so much more than I ever thought I could and I don’t care if you think otherwise (which, by all the reviews I’ve seen, it seems a lot of people do).
The story kicks off with Grace wandering the halls of Katemere not realising that she’s lost four months of her life in stone and can’t remember any of it. She becomes more freaked out when she discovers that she is in fact the only gargoyle to have existed in a thousand years. Not only that, but that she’s losing time in reality when she blacks out for hours on end with no recollection of what happened or why, only to discover that the reason is that Hudson, the evil vampire brother of her mate who had to be destroyed in order to stop a war from happening, has taken up residence in her mind. Intriguing no? Even more so when we discover that he remembers everything that happened between them in the four months she was in stone and refuses to tell her anything.

‘He lifts one dark, perfect brow. “But I’ve got to say, you are a feisty one. Do you really think Jaxon can handle you?”
“It’s none of your business what Jaxon can and can’t handle.”
“So that’s a solid no, then?” This time, he flashes a sly little smile that should be obnoxious but somehow only ends up making his already perfect face look even more perfect.
“Aww, you think I have a perfect face?” He turns his head to the side to emphasise his sky-high cheekbones and chiseled jaw. “What’s your favourite feature?”
“You weren’t supposed to hear that.”
“I’m in your head, Grace. I hear everything.”
“But I see you over there, and your lips are moving.” All of a sudden his words register. “Everything?”
He holds up one finger. “First, only you can see me. Your mind is manifesting me. And two…” His smile gets even slyer. “Everything.“

I usually can’t stand a love triangle but DAMNNN this one was good. From the first book, it would be hard to imagine the story without Jaxon being the vampire in shining whatever, but I can honestly say I couldn’t care less about him in this book. At all. Because Hudson. Because of all that is Hudson. The brother everyone is terrified of is just as dark, just as brooding, just as good looking but way more powerful, way more amusing and can sure as hell return the fire that Grace throws at him through their mind connection. Their relentless bickering is so appealing, you can’t help but get lost in their own little world with them and often forget about the other characters around them, yes, including Jaxon.
I get the feeling Wolff took some inspiration from the Vampire Diaries for this little heart torture. I wanted to like Jaxon in this book, I really did, but with Hudson around, the intense powerful prince of darkness we came to love in the first book, becomes an annoying little brother who just seems to get in the way. So much for predictable.

It wasn’t just the way the author brought Hudson in to mess with the romance we had going in Crave, but I have to say, the storyline was pretty decent! Everything that was missing from the first book emerged in Crush. The overall setting came to life whether it was visiting the Bloodletter in her cosy mountainside cave, the everyday gothic castle boarding school environment from the library to the laundry room, traveling through magical portals from a dragon graveyard or the island volcano home to the unkillable beast. The plot was fast paced and surprisingly absorbing, I may or may not have stayed up until 3am at one point..

Even the additional characters started to have more of a build up so they were easier to relate too and sympathise with. For fantasy beings who don’t mix well with others, we suddenly had a powerful squad of mismatched creatures; a one of a kind gargoyle, a vampire prince, a witch, two dragons, and a lone werewolf, not to mention the puzzlingly powerful vampire brother as a ghost like projection.
The story was still told from Grace’s perspective but the more she comes to terms with who she is as a gargoyle, the more she opens up with those around her which brings more depth to the characters than previously.
Grave herself was way less annoying now that she wasn’t just obsessing over Jaxon, she was too preoccupied with fighting with his brother in her mind, trying to understand her connection with the both of them, figuring out how to remove Hudson from her body as well as discovering parts of her gargoyle self and the powers she possesses whilst training for the Ludares tournanent which was a great bonus to the story that made it even more unique and satisfying.

The author has a sneaky little habit of introducing chapters with another perspective at the end of the story, in Crave we finally got a glimpse into Jaxon’s mind which allowed you to retrace back to the start. This time we had Hudson’s perspective which honestly just made me go back to the beginning to re-read a bunch of chapters to fully understand why he acted the way he did through the story. We’re left with another cliffhanger which will beg the question of who will win Grace’s heart – Jaxon or Hudson. #teamhudsonforever.

For anyone who has taken to this vampire romance as their new guilty pleasure, the next book comes out on the 2nd March 2021 🙂

Goodreads Review:
Everything feels off—especially me. I’ve returned to Katmere Academy, but I’m haunted by fragments of days I have no recollection of living and struggling to understand who, or what, I really am.
Just when I start to feel safe again, Hudson is back with a vengeance. He insists there are secrets I don’t know about, threatening to drive a wedge between Jaxon and me forever. But far worse enemies are at our doorstep.
The Circle is caught in a power play and the Vampire Court is trying to drag me out of my world and into theirs. The only thing Hudson and Jaxon agree on is that leaving Katmere would mean my certain death.
And not only am I fighting for my life, but now everyone else’s is at stake—unless we can defeat an unspeakable evil. All I know is that saving the people I love is going to require sacrifice.
Maybe more than I’m able to give.