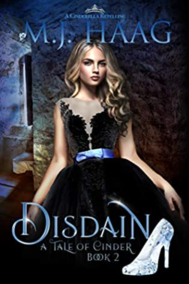 Favourite Quote: ‘”Fate can be fickle and cruel,” she said softly. “But it’s up to you whether to fight or accept what it hands you.”
I thought of what it had handed me. Death. Brutality. Captivity. I refused to accept that would be the remainder of my life.’

Eloise and Kellen’s lives have turned upside down in the span of a few weeks. With their mother dead, their father potentially dead in the dark forest, Anne and Judith’s life drained from them, Hugh under a magical influence and the very person who they welcomed into their home for comfort was the very reason for all their destruction. Maeve was now using Kellen as a means to control Eloise who now lives chained up in the kitchen, and using the maids to pleasure the men of the town in their home in order to get her way and feed her magic through their pleasure. Maeve has a plan, and for her plan to succeed she needs both twins alive and keeping appearances, but why? The only way to find out is to remove the control, which means Kellen must find a way to escape no matter what.

‘”You need to leave,” I said. “Find a way to run.”
“No. She promised she would -” Kellen winced and rubbed her throat.
“I don’t think she will,” I said, understanding what she couldn’t say. “Maeve has had the opportunity and hasn’t done anything. Instead she’s used my safety to control you. And yours to control me. Why, Kellen? Why would she want to control someone she intends -?” I winced when my throat clenched.
“She wouldn’t.” Kellen frowned. “Why does she need us controlled?”‘

This book is not for the kind hearted, whilst the first book took us in with a slow start and not much action, the second book is disturbing, abusive and a real dark twist to the happy ever after you would expect from a fairytale retelling. This book does include attempted rape and beatings for anyone who wishes to avoid this subject. You will witness the full abuse ‘Cinderella’ goes through as she is magically bound to her stepmother, unable to tell anyone the truth, unable to stop the deaths surrounding her and unable to be with her sister who has managed to escape to the dark forest. It’s cringeworthy, dire and horrific, it’s hard to see how the story could end with a happy ever after with the amount of suffering we see her go through.

Maeve’s darkness only deepens when she arranges for her daughters Cecilia and Porcia to come to the house, a trio of magic that will do anything for power. No amount of blood will stop them from their goal of getting more information about the royal family’s whereabouts. The sisters are as cruel and sinister as you could imagine. They will kill, dismember, send plagues and control the people through their magic to get what they want and Eloise is in the middle of it all, unable to help, unable to stop it.

Eloise is still fighting against her evil stepmother and her new stepsisters in her own way. Now that Kellen has escaped, she will do anything to keep her safe, even if that means taking the beatings and keeping up false appearances even if it breaks her. Maeve wants her to be obedient and follow the rules she has set, even if those rules change in an instant depending on her mood.  The only way to push through is to pretend that Maeve is in control and find out as much as she can about her plans and how she and Kellen are part of that plan. She’s strong, defiant and resilient which speaks highly of her character. She’s tough but knows when she’s beaten, she’s smart enough to pick her own battles. It’s endearing to see that she allows herself a small measure of hope when it comes to Kaven and what they could be even with the horrors that surround her.

‘She didn’t need to ask if I understood, but I nodded automatically as if she had. Her smile widened further, and in that moment, I truly did understand. My place was under her thumb. Under her control. And, she was starting to believe she had me there. She turned and left the room, and I stared after her, keeping my expression impassive. I’d let her think she was training me. My goal hadn’t changed. I would find a way to stop her.’

Kaven annoyed me a bit in this book, he appears whenever Eloise is allowed time outside but then tells her he’s busy – like he wasn’t just waiting in the woods all day for her to appear for gods sake! What can only be described as a stalker in the real world, yet he can’t seem to see anything that goes on in her life to make her constantly hurt or changes in her attitude or appearance. So she went from having a cut on her head to a black eye and then a bad back, to warning him to stay away and never come to the house or talk about bewitchment? Come on man, open your eyes – you can’t be that oblivious when you’re one of the kings guards looking for magic. Not that he didn’t have his good moments, I still love their banter when they are together – it’s the only joyful moments you’ll get in this book which makes their interactions all the more pleasing.

‘”Fine. You may -” He scooped me up into his arms and started walking toward the house. I stared at him in astonishment. He caught the look and grinned in another flash of lightning.
“I’m feeling a bit of surprise, too. I’m not sure if it’s you or the dress, but you’re heavier than I expected.”
I spluttered. “I am not heavy.”
“If you’d like to remove the dress when we reach the Retreat, I’d be happy to try again.”
I smacked the back of his head.
“Walk in silence, manservant.”

I really liked how we get to see more of Snow White’s tale through out this story as Maeve is reunited with her magic mirror who can show her anything she wishes to see – that is except the prince who is magically hidden from her sight no matter how often she tries. We are introduced to the tracker, our very own woodsman who is sent into the dark forest to collect Kellen by any means necessary, and discovers her location amongst the dwarves. I’m really enjoying the joint fairytale in this story, even if it’s in pieces. I’m looking forward to reading M.J. Haag’s Snow White perspective!

‘”Before returning, check the ribbon in the box. If the ribbon is whole, bring the girl to me alive.”
“And if the ribbon does not stay whole?” he asked.
Maeve’s lips curled into a smile that made my insides shiver.
“If the ribbon withers and fades into dust, cut the girl’s heart out of her breast and place it in the box. Do you understand?”
“Yes, My lady.” He bowed his head and left the room.
Maeve came to me, bending down so we were level. The pendant swung freely, now a dull green.
“I control whether the ribbon remains whole or turns to dust. If you cause trouble, the tracker will kill your sister. Do you understand, Eloise?”‘

As the second book of a dark trilogy of course it’s going to have a cliffhanger, we’ve come to discover Maeve’s true intentions and uncovered a dark secret that has given Eloise the strength she needed and the determination to see things through no matter what the cost.
Check out the final book in the Tales of Cinder trilogy Damnation!

Goodreads Review:
Eloise knows the name of her mother’s murderer, but she cannot speak it. A curse keeps her silent and locked in the tattered remains of her once charming life. Though magic holds her tongue, it doesn’t quell the smoldering spark of her anger or her need to learn the reason behind her mother’s death.
However, games of magic have dire consequences. Desperate to keep those she loves safe from the repercussions of her actions, Eloise must make a bold gamble with her safety that could win her everything or destroy her forever.
Two lives hang in the balance. For, if Cinder fails, Snow will fall, too.