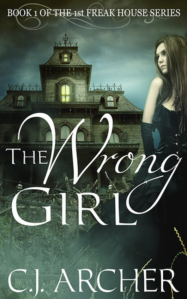 Favourite Quote: ‘”But you can control your fire, can’t you?”
He lifted his gaze to mine. “The sparks and heat come only when I’m very angry. Or so I thought.”
“You’re not angry now.”
He turned away. “No.”
“Then.. why? I don’t understand.”
“It’s not important.”
“It is important! Why now, Jack? What was different about this time?”
“Do you have to ask?” he muttered.’

Hannah Smith longs for some freedom, but is under no illusion that she is lucky to be where she is. Most orphan girls in her situation would have ended up on the streets or in the work house, but she can’t help but dream of seeing the world outside her window. Her role is the companion of the earl’s daughter Violet. A girl her own age who has the ability to start fires when she’s upset. They’ve been living up in the attic together since they were children when their unwanted abilities came to light. Vi the frightened fire starter, and Hannah the optimistic narcoleptic, together they created a bond like no other.
Hannah had no idea that her wish was about to come true when she finds herself kidnapped by the new gardener Jack, and taken to a huge mansion in the middle of nowhere known as Freak House, home to a disabled mad scientist, his niece, their mute butler, and their very own fire starter, Jack, who is keen to learn more about the powers in her. Hannah quickly realises she wasn’t the intended target, they weren’t after her, they were after Vi. How long can she pretend she’s Violet until they discover the truth?

‘”Then what do you want with me? If you mean me no harm, why am I here?”
Langley turned his steely grey gaze on me. “I’d heard you were clever.”
I bristled. “Heard from whom?”
“Never mind that. You’re here not because of who you are, but what you are.”
My heartbeat slowed. My cheeks cooled. I sat very still and stared at Langley, although I didn’t really see him. I’d known it all along, but I’d not wanted to admit it – I’d been kidnapped because they thought I was Vi, and Vi could start fires with her mind. I swallowed hard.’

You shouldn’t be surprised that I picked up another series from C.J. Archer. I love her writing style and her stories continue to pull me in. Each book I read of hers contains the same ingredients of historical fiction, a captivating storyline, elements of magic and a swoon-worthy romance that only gets better throughout the series. C.J. surprises me every time and The Wrong Girl is no exception. I do however have an issue with the cover since our main protagonist has red hair.. but that’s my issue. The overall gothic victorian look holds out in the book with the creepiness of Freak House, it’s mute lurch-like butler, the mad scientist and the huge empty house with old ruins attached.

The characters were well written and the build up between them was wonderful, each character harbouring their own secrets but tied together for a single purpose, to control the fire within Hannah (or rather Violet as they all believe). Hannah was a great protagonist, young and naive about the world since she spent her life confined to an attic with little company, you watch her going through new experiences in life she never had before, riding a horse, having her own room, traveling to exciting places, meeting new people and just having the freedom to come and go as she pleases. It’s nice to see the changes she goes through, all the while living to the new rules of the Freak House. The connection she shares with Jack is immediate and its sweet, innocent and endearing. I loved their first crush interactions with each other, but then I’m a sucker for romance if you hadn’t guessed already.

‘”I thought it was ladies who were supposed to be the secretive ones,” I said.
“Does this mean that the lovely Lady Violet isn’t telling me everything? And here I thought you wore your heart on your sleeve.”
“And how do you know what’s in my heart, Jack Langley?” I asked softly.’

Jack was an interesting character full of mystery, the only other known fire starter but is able to naturally control his ability. He’s abnormally fast and strong, and whilst he appears to be a gentleman, his true accent comes out when he’s angry giving him a gruff lower class Londoner personality which Hannah is not allowed to talk about. He has secret meetings with the servants, his authority comes and goes when it comes to August and his boyish charms are innocent but careful. He’s full of secrets that you can’t help but feel intrigued by him, his past and his current situation in the Freak House as a fire starter.

The additional characters are well written and bring the story to life with their dynamic differences, each with their own impact on Hannah’s life whether for protection, fear, control, friendship or otherwise. I liked how the story was only told from Hannah’s perspective as it brought more mystery to the characters around her and their role in her situation. Uncle August keeps himself locked away to his part of the house, as a recluse who isn’t used to being around others, his demeanour is blunt and hurtful and although he may believe he’s doing the right thing, his actions have deeper consequences than he cares to admit. With Sylvia, it always feels like she’s trying to tell you something, but choses to hide her character behind standard etiquette and social expectations even when she’s the only one in the house to do so. I can imagine that she could tell a story of her own if given the chance.
Whilst the book doesn’t end on an emotional cliffhanger, it does leave some questions unanswered and you’ll be keen to read on to find out what happens in the next part of the story in Playing With Fire.

Goodreads Blurbs:
It’s customary for Gothic romance novels to include a mysterious girl locked in the attic. Hannah Smith just wishes she wasn’t that girl. As a narcoleptic and the companion to an earl’s daughter with a strange affliction of her own, Hannah knows she’s lucky to have a roof over her head and food in her belly when so many orphans starve on the streets. Yet freedom is something Hannah longs for. She did not, however, want her freedom to arrive in the form of kidnapping.
Taken by handsome Jack Langley to a place known as Freak House, she finds herself under the same roof as a mad scientist, his niece, a mute servant and Jack, a fire starter with a mysterious past. They assure Hannah she is not a prisoner and that they want to help her. The problem is, they think she’s the earl’s daughter. What will they do when they discover they took the wrong girl?